Our Vision and Mission

Vision: The Coming to the Table vision for the United States is of a just and truthful society that acknowledges and seeks to heal from the racial wounds of the past—from slavery and the many forms of racism it spawned.

Mission: Coming to the Table provides leadership, resources, and a supportive environment for all who wish to acknowledge and heal wounds from racism that is rooted in the United States’ history of slavery.

The CTTT approach to achieving this vision and mission is grounded in theories and practices of Strategies for Trauma Awareness & Resilience (STAR), with a particular focus on Transforming Historical Harms and their trans-generational transmission, working toward racial justice and equity through a Restorative lens, and utilizing Circle Process and Touchstones to create space in which participants feel safe enough, and motivated, to do the work. Then, the CTTT Approach involves four interrelated practices:

History of Coming to the Table

“Will Hairston is a white man who descends from one of the largest enslaving empires in the Old South. The story of his family’s complex web of relationships over many generations, from slave owners through the recent past, is told in Henry Wiencek’s book The Hairstons: An American Family in Black and White.

‘When he was eighteen years old, Will attended the annual family reunion of the ‘Hairston Clan,’ an eight-hundred-person-strong gathering of an African American family with roots in the South and a direct connection to Will. The Hairstons have been convening family reunions since 1931. In 1980, they invited Waller Staples Hairston, Will’s father, to join them as their guest speaker at the Hyatt Regency Hotel in Washington, DC. Will accompanied his father.

“Waller Hairston descended from a dynasty that, at its height, controlled nine plantations—encompassing upwards of forty farms—stretching from the tidewaters of Virginia to the backwoods of Mississippi. Many thousands of African American people worked their lands as slaves, making them one of the richest families in the antebellum South. It was only recently that black and white Hairstons would have gathered for such an affair. It is a story that few from the family’s storied past would have ever believed possible.

“Seventy-nine-year-old Jester Hairston, the noted composer, songwriter, and actor, was there. He led the singing of his song, Amen, made famous in the 1963 film Lilies of the Field.

“Will was transformed. The experience of the reunion, of being with the descendants of the people his ancestors had once enslaved, of being welcomed and accepted there, changed his life. He witnessed the power of song, of coming together, and of connection with a family much larger than he had ever known. 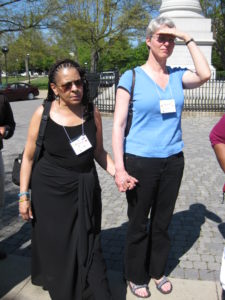 “Susan Hutchison is the six-times-great-granddaughter of President Thomas Jefferson and his wife, Martha. In 2003, after exploring her family history—and its deep connection to slavery—she attended an unlikely family reunion as well. Hers was with the descendants of Jefferson and Sally Hemings, the woman he enslaved on his Monticello plantation and who bore several of his children. At the reunion, Susan met Henry Wiencek. Having experienced the power of reunion, she told him she wanted to meet other white descendants of families who had enslaved people.

“Henry introduced Susan to Will. Together, they came up with the idea of a family reunion that was vastly different from what most people are accustomed to. It would not be a meeting of just one family. It would be a reunion that involved multiple families from both sides of the racial construct; a reunion of black and white—the descendants of people who were slaveholders with the descendants of those whom they had enslaved.

“Their idea was based on one key acknowledgment: Be they black, white or mixed, families are families. America’s legacy of slavery ripped apart untold numbers of family bonds. Not only were African American families broken; white families were estranged as well. From the time slavery was instituted in the United States black and white generations had lived and died together. They often had children together. But there was profound alienation on both sides of the racial divide. Far too many white Americans were in denial, believing that the wounds of the past had been healed by the civil rights movement of the 1960s.” 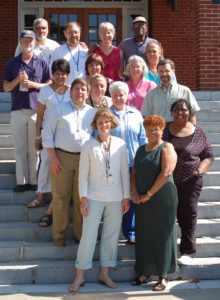 “Susan and Will saw building relationships with the ‘other side’ as a path toward a future where the deep wounds engendered by slavery could be confronted and potentially reconciled. They were inspired by Dr. Martin Luther King Jr.’s words, spoken from the steps of the Lincoln Memorial on August 28, 1963: ‘I have a dream that one day on the red hills of Georgia the sons of former slaves and the sons of former slave owners will be able to sit down together at the table of brotherhood.’

“Fired with resolve, Will and Susan invited their cousins to share another observation made by Dr. King: ‘We are caught in an inescapable network of mutuality, tied in a single garment of destiny.’ Under their leadership, black and white Jeffersons and Hairstons began planning a revolution. A group now known as Coming to the Table was born.

“An experience was planned in which black and white descendants of ancestors linked by a slave/slave-owner relationship, a blood connection, or both could explore the history of slavery—its legacy and impact on their lives. They had a longer-term goal to create a model of healing to guide individuals and groups that continue to struggle with racism in the United States and throughout the world. 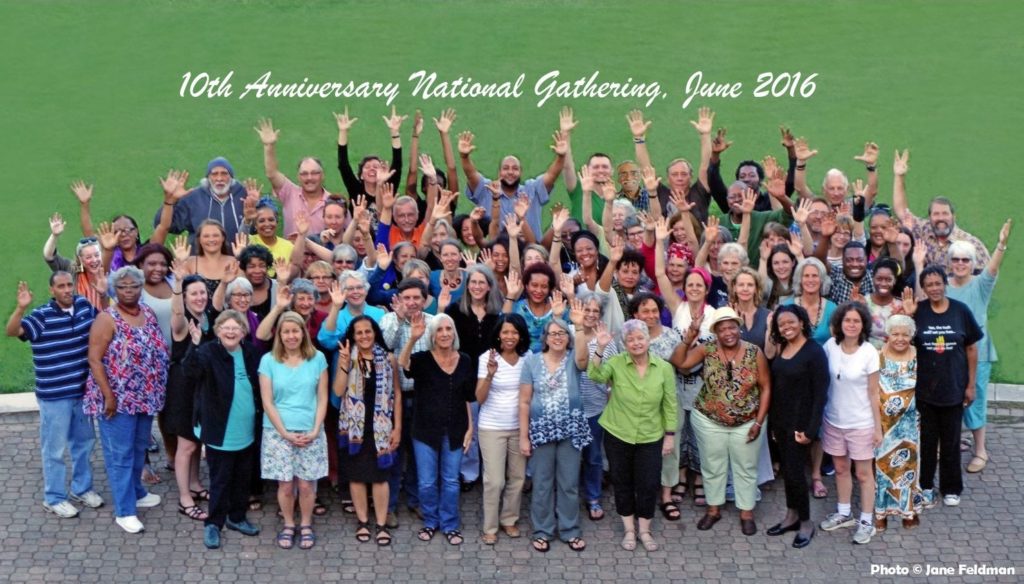 “Forty-two years after Dr. King shared his dream, two dozen descendants from both sides of the system of enslavement gathered at the table. That first small retreat took place in January 2006 at Eastern Mennonite University in Harrisonburg, Virginia, where Will worked. Through sharing stories and building relationships, the participants embraced King’s dream: They began to envision a more connected and truthful society that would be eager to address the unresolved and persistent effects of the institution of slavery.”1

Amy Potter Czajkowski, who worked for The Center for Justice & Peacebuilding at EMU, was the Founding Director of CTTT and led the program formation in partnership with the CTTT community. Amy worked extensively within CJP and EMU to secure the original organizational home for CTTT, led collaborative planning and research efforts, created conceptual frameworks, and obtained grant funding. Amy and David Anderson Hooker, consulting with other experts and CTTT members, developed the Coming to the Table Approach. They led trainings in Transforming Historical Harms (THH). You can download a free copy of the THH Guide HERE.

In 2019, Coming to the Table transitioned to become a Program of RJOY (Restorative Justice for Oakland Youth). RJOY works from an anti-racist, anti-bias lens to promote institutional shifts toward restorative approaches. RJOY provides education, training, and technical assistance and collaboratively launch demonstration programs with their school, community, juvenile justice, and research partners.

1 – Excerpt from Gather at the Table (Beacon Press, 2012), by Sharon Leslie Morgan and Thomas Norman DeWolf. Thanks to Jane Feldman for group photo from 2016 National Gathering.

CTTT began as a program of Eastern Mennonite University in 2006. In 2019, CTTT became a program of RJOY (Restorative Justice for Oakland Youth.
You can join other members who participate in a host of online activities, including YouTube, the CTTT Facebook page and very active Facebook group, Instagram, and Twitter. Among many other activities, CTTT:
Ongoing partnerships include support for preservation of former slave dwellings. The Slave Dwelling Project is led by Joseph McGill. Several members present the CTTT story nationally and locally from both sides of the racial divide as Betty Kilby Baldwin and Phoebe Kilby do. CTTT inspired the book Gather at the Table (Beacon Press, 2012), which 2012 Nobel Peace Laureate Leymah Gbowee calls “an honest exploration into the deep social wounds left by racism, violence and injustice.” 2019 saw two books published that were written by CTTT members: The Little Book of Racial Healing and Slavery’s Descendants.

The Future of CTTT

Many future activities are planned for CTTT, including:

Want to be involved? Go to our Contact Us page and send a message to let us know. 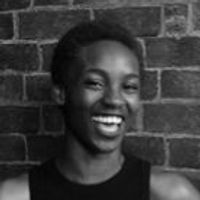 Jodie was born in Jamaica, West Indies and migrated to the United States at the age of 6. Through her experiences as a Caribbean-American immigrant Jodie found herself pushing to have deeper and more intersectional conversations about race, justice, truth telling and healing. As a community organizer, writer, and restorative justice healer Jodie seeks to be a home where young people and elders can learn together and create collective community responses to the transformative healing of historical harms built in the legacy and history of slavery. Jodie has had numerous articles published on mass incarceration and racism. Click here to read more. Jodie is co-author of The Little Book of Racial Healing. 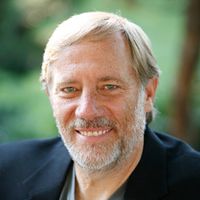 Tom DeWolf has been involved with CTTT since the first gathering at Eastern Mennonite University (EMU) in January 2006. Tom is a trained STAR Practitioner, and has taken classes in Restorative Justice, Transformative Theater, Media for Societal Transformation, Building Restorative Organizations, and Circle Processes at the Summer Peacebuilding Institute through the Center for Justice & Peacebuilding at EMU.

Tom is the author of Inheriting the Trade (Beacon Press, 2008), the story of his experiences in the making of the Emmy-nominated, PBS documentary, Traces of the Trade, co-author, with Sharon Leslie Morgan, of Gather at the Table (Beacon Press, 2012), and co-author, with Jodie Geddes, of The Little Book of Racial Healing (Skyhorse, 2019). Tom is also a public speaker and workshop facilitator at universities, corporations, and conferences throughout the United States.

To send a message to the full Advisory Board, to individual Board Members, or to the Program Managers, please use our Contact Us page. If you wish to communicate with a specific board member, please note their name in your message.