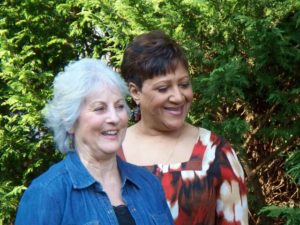 When Sheila Reed Findlay used DNA testing to help her trace her family tree, she didn’t expect to learn that she was a biological match to a Virginia family that was white.

Findlay, a 62 year-old teacher from Queens, N.Y. is African American. She has been researching her family since 1995. Findlay knew that her father’s family, the Reeds, went back to the mid 1800s in Portsmouth, New Hampshire where she grew up, but nothing more. In her research, she’d always focused instead on her mother’s family and their well-documented history. Findlay’s maternal great-great-grandfather, John Samuel Jones, escaped slavery in North Carolina with the help of Harriett Tubman on the Underground Railroad. The two former slaves relocated to Auburn, NY with their families and there, the famed Underground Railroad conductor Tubman taught Sunday school to Findlay’s grandfather, Harry Jones. When Tubman died, Harry Jones was a pallbearer at her funeral. Harry Jones loved and documented his family’s history, Findlay said, but on the Reed side, there was little documentation for her to follow. After twelve years of hitting the brick wall of slavery in her Reed genealogy research, Sheila decided to do DNA testing.

In 2007, Findlay used Family Tree DNA to find out more about her paternal ancestors. The company’s website is a repository of DNA information which notifies subscribers when they have a close match with someone else on the site. But the site doesn’t include the race of the subscribers.

“She thought I was black and I thought she was white,” said Sherrie Patterson Royster, one of the people who matched Findlay’s DNA sample. Royster, 65, has also spent the past 15 years researching her paternal ancestry. Her fourth great-grandfather, David Patterson, was a slave owner in South Carolina, owning 21 human beings at the time of his death, including First Lady Michelle Obama’s third great-grandmother, Melvinia Shields.

“I don’t know when it finally dawned on us that we were opposite races. It was a shock at first. Then it was kind of neat. Then, I thought, `How could this be?’” Royster said.

A retired Department of Transportation worker for the state of North Carolina, Royster grew up a ‘military brat’ and had interacted with all kinds of people all of her life. But her male cousin who had submitted to the testing was angry about what the results showed – that one of their ancestors had fathered black children.

Royster was happy to have a research partner to help her chip away at the genealogical brick wall she had hit with her Patterson ancestor, David. She felt sure that working together with Findlay, the duo would eventually find something.

For Findlay, the partnership was initially tricky.

“I realized the discomfort that I have with having to interact with white families to get my own history,” Findlay said. “I knew emotionally I was going to be in trouble with that.”

A former president of the Portsmouth, New Hampshire branch of the National Association for the Advancement of Colored People, Findlay has always worked with community organizations and police forces to help foster dialog across racial lines. She was president when the Ku Klux Klan established themselves in the town next door, and has pictures of the KKK coming to summer ‘Race Unity Day’ picnics that the NAACP coordinated with the local B’hai Faith group. When she learned of Coming to the Table through an online African American genealogy forum, she knew they could help her in this new terrain.

“They were another step toward dialogue,” Findlay said.

“We were both careful when we realized we were different colors,” Royster said. After their initial tentative interactions, the two women began corresponding almost daily for two years. Finally, they met face to face in Richmond in the summer of 2010. That’s where the trail for both women’s Patterson ancestors runs cold.

At the end of the Civil War and the fall of the city of Richmond, VA, Findlay’s paternal great-grandfather, Samuel A. Reed, was allegedly found, as a small boy, wandering the devastated city’s streets by a white Union officer, Captain Matthew T. Betton. Said Findlay, “Samuel was brought to Portsmouth, NH in 1865 from Richmond by Capt. Betton who had been stationed in Richmond and Petersburg through a good portion of the war. Capt. Betton also had long-time friends in both of those cities and had lived a short time in Petersburg as a young man. Betton saw to it that Samuel received some education after bringing him out of slavery in 1865. I have just recently established this fact because of a September 1865 letter given to me by the present-day Bettons in which Mrs. Betton is arranging, on behalf of her husband the Captain, for Samuel to make the final journey to Portsmouth, NH from where he was being educated in Boston, MA.”

David Patterson was also connected to Virginia. Royster found information linking him to Amherst and Bedford Counties. So the cousins headed to the state’s capital, Richmond.

They didn’t learn more about these two men from their families’ pasts, but they did make discoveries that are forging a path for their futures.

Royster, who always knew she had slaveholders in her family, never really knew what slavery entailed until she met Sheila.

“I always thought [slaves] were owned, well-fed, and just worked. I really had a misconception about slavery. It never dawned on me the beatings I saw in the movies, that they were true,” Royster said, adding that growing up, she never heard much about slavery. The sexual exploitation of female slaves by their white owners was a particularly harsh wake up call for her. “Sheila’s taught me so much that she’s found out that’s really horrified me. I don’t know how I came up with the idea that [slavery] was just a living agreement. [Meeting Sheila] has changed me.”

As for Sheila, she discovered patience.

“I was patient with understanding when she had bogus information and controlled myself.” Sheila said. Sherrie didn’t know that it was against the law for slaves to read and wondered why they didn’t teach themselves. “We’ve both had patience with each other.”