The Collision of Black and White 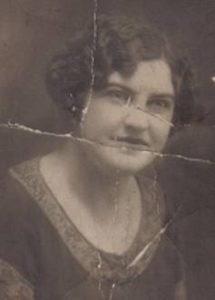 My grandmother, Jennie Waymoth, was a farm girl from Eastern Illinois. Born in 1902, she grew up milking cows on her father’s homestead in Sidell. When she left the farm sometime around 1925, headed for the bright lights of Chicago, she changed her name along the way to a more sophisticated “Jeanette”.

My grandfather, Louie Nicholson, was a southern emigre who left his birthplace in Mississippi in 1907 at the age of 12. His transformation from “country boy” to “urban dandy” elicited a change of spelling, from “Louie” to “Louis” and the addition of a middle name – “Bell” – which was borrowed from a family friend.

When Louie left Mississippi, his father had just died from yellow jaundice, leaving behind a grieving widow with six mouths to feed. That was around the time his maternal grandmother lost her case against the estate of the “consort” who had fathered her 16 children. The “powers that be” at the time advised her (and her children) to get out of Mississippi. Most of the family heeded their caution and headed north to Memphis, Tennessee. My grandfather and his siblings all ended up in Chicago. The Waymoths, on the other hand, had followed a circuitous but unforced path of migration from Kentucky to Indiana and, finally, Illinois.

By the 1920’s, Louie was working on the Illinois Central Railroad, plying the route between Chicago and New Orleans. Jennie was a waitress in the train station restaurant.

In 1926, Louie and Jennie had the temerity to marry. It was a decision that was not very popular at the time. In America, the number of people who exercised that choice were statistically irrelevant.

On their wedding day, miscegenation was illegal in 38 states. Its prohibition was most notably exemplified by the “Racial Integrity Act,” passed in 1924 by the state of Virginia. The act made it illegal for white people to marry anyone with “a single drop of Negro blood.” In defense of statutes such as this, and the mores that made them expedient, the Ku Klux Klan was rampaging in the South, protecting the purity of white women from the savage lust of black men.

Ironically, the majority of people in Vermillion County (Sidell), were Quakers who originated in the South and left because of their distaste for slavery. Abraham Lincoln, “the Great Emancipator,” practiced law in the county seat of Danville for many years. Notwithstanding such a robust history of progressiveness, from the day Jennie and Louie married, Jennie’s family from thenceforth considered her dead. It was not until 1967 that interracial marriages were allowed in all states.

Throughout my life, I have never quite known how to process this family history. I grew up in the same house with my grandparents. My mother looked more white than most white people and I entered this world with a fair complexion. My lack of coloration has been both a blessing and a curse.

When I came to the table in 2008, the story of my grandparents was not even part of my conversation. I was more interested in my family’s past in slavery. The more I learn about that and the more I confront the difficulties that ensued subsequently, the more conflicted I am about my grandparent’s relationship — what it all means and where this is all leading to.

In an ideal world, there would be no race. It is merely a political construct that keeps one group of people in power and another group of people cowed into submission — all based on the “color of one’s skin.”

Today, I wear my grandmother’s cameo around my neck. This little bauble, which I estimate to be at least 150 years old, was one of my grandmother’s cherished possessions. Her mother (Filura) had received it from her mother (Isabella) and passed it along to my grandmother (Jennie). She gave it to her daughter (my mother, Delores) when she was a teenager. My mother passed it on to me.

My cameo symbolizes a chain of unbroken genes, hanging on a chain of racial acrimony. For me, it is this paradox that must be addressed if we are ever to move forward to a truly egalitarian America that guarantees and protects the rights of all regardless of race, creed, color or sexual orientation.

(Photo is the personal property of the author)