Abolitionists’ Museum is a play written and directed by Sheri Bailey. In October 2016, it was performed in three locations in Charlottesville, Virginia: City Council Chambers, The Haven (a multi-resource day shelter for the homeless), and Ebenezer Baptist Church. The performances were produced by Jim Mustin. Sheri and Jim have both been associated with Coming to the Table for many years. Each audience comprised approximately 75 people. 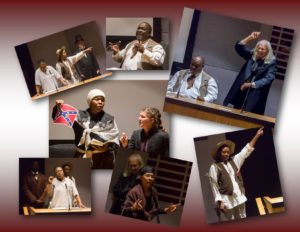 In Abolitionists’ Museum, wax figures of abolitionists are housed in a museum where the curator recently hung a Confederate flag. The flag so upsets the statues that they come to life in protest. Using actual words from speeches and writings mixed in with contemporary references, the statues passionately debate and vote on whether or not to burn the rebel flag.

Abolitionists’ Museum captures a robust discussion on slavery and the Confederacy as it poses a compelling contemporary question – How do we, in today’s times, overcome the past? At the play’s conclusion. the audience is invited to share their 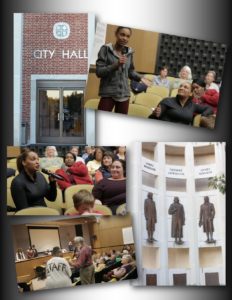 thoughts about the play and the first question asked is this – If you lived in the Abolitionists’ Museum how would you vote – to burn or not to burn the flag?

The performances were well received. Audience discussion was based on the “No Shame/No Blame” principle. This allows for a range of opinions to be expressed. You can watch a powerful exchange from a previous performance in this video.

Looking forward, Jim and Sheri hope to make the script of Abolitionists’ Museum available free on-line to teachers in Middle and High Schools. Teachers would also receive a lesson plan and supporting videos. Another avenue is to present the play at historic venues such as Jamestown, Williamsburg, Ft. Monroe, and Monticello.

Today we need ways for people to respectfully share their perspectives on our painful history. Abolitionists’ Museum is a good way to do that.