I was a little over a year old when the Watts Riots broke out in Los Angeles in August 1965. I don’t remember clearly what I first saw of the events, but I do have a memory of frightening violence on the screen of our black and white Magnavox TV set. I saw people hurting each other, and it wasn’t clear from what I was seeing whether the people running or throwing things or being taken down on the ground were the most to be feared or the people chasing them, who looked like the only people I ever saw in my small California foothills town. That is, white people.

I probably only watched a few minutes of the news before it was switched off – but the images I saw stayed with me. They were still strong when, a year after this (likely around my birthday in June ‘66), I was taken to a movie theatre by my mother and grandmother, in a city in the Central Valley where my mother had grown up, for what became my first face to face encounter with the complexities of race and history. It was an encounter my grandmother had had long before me. 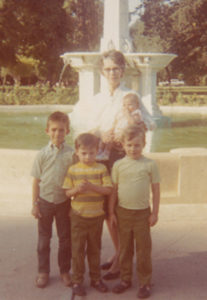 My maternal grandmother was a descendant of several generations of slave-owning ancestors, in Virginia, Georgia, Mississippi and Louisiana, and cousin to the DeWolf slave-trading family of Rhode Island. Born in 1913, in her girlhood Grandma had known people who had once taken slavery for granted, something she couldn’t fathom. “Had I lived then,” she told me firmly, “I would have let them all go free.”

Grandma’s first childhood best friend had been the daughter of a black woman who came to help her mother with laundry on their farm near Gainesville, Texas. The girl’s nickname was – Scissor Bill – and her mother’s smacked vaguely of plantation days: Aunt Sammy. But Aunt Sammy was a member of the family, with a family member’s love and care. When my grandmother’s youngest sister was believed to be dying of a fever, while my sleepless great-grandmother sat with the unconscious child, Aunt Sammy was in the kitchen, ironing the girl’s clothes by the stove. As my grandmother remembered it, Sammy wept as she ironed, and she did something else—she spoke to each little dress and shirt as if it were the sick girl, telling her all would be well, that she would get big and strong, and that she loved her. As she played in the yard with Scissor Bill, Grandma could see Sammy in the kitchen, talking and praying through her tears. The sick girl recovered, much to everyone’s joy—especially Sammy’s. And yet, as my grandmother told me with pain in her voice not lessened by the years, Sammy had to come in the back door of the house, not the front. That Sammy loved her white family, despite the unspoken rules of a black woman’s place even within that family, moved my grandmother deeply.

Because we spent so much time together, Grandma shared many memories with me that were happy ones, and sometimes frightening ones, too. When Grandma was a girl on her father’s farm, she related to me, word reached the family that a female relative had been lying in bed one night, much as we were doing, when she heard something move underneath. She called to her husband, who brought in a lamp. The light fell on a black man emerging from under the bed. He managed to get out a window but was captured. Grandma told me that something terrible had happened to that man. “I can understand her fright,” she said. “What was he doing there? But in those days and those parts, they thought a black man was in a white woman’s bedroom for one reason only.” The savagery of the summary “justice” dealt this black man by a mob of white men haunted her.

Not surprisingly, the Ku Klux Klan was active in the area. Around this time, Grandma’s father was actually asked to join. Grandson of an Arkansas man who had crossed enemy lines in 1862 to fight with the Union Army—at cost of his life—my great-grandfather turned the offer down. Grandma was a true daughter of these men: she wanted no part of a world where racism and hate fed intolerance and murder.

I don’t remember what movie my grandmother and mother had taken me to see that summer evening in 1966 (it was probably a Disney cartoon) but I do remember what happened before the film even began, because in retrospect—as she told me later—it was my grandmother’s worst nightmare. In the half-light, I saw a woman in front of us who reminded me of the people I had seen on our TV, running in the flames and violence of South L.A. Not that she was the type of person you could imagine hurting anybody: she was a large, motherly woman, her hair in a bun, wearing a sleeveless pastel dress.

“Mommie,” I asked, pointing at the woman, “is she a bad person?”

If my mother, a passionate supporter of civil rights, was horrified, imagine how my grandmother felt. I remember the woman turned around to look. My grandmother’s gentle voice spoke over my head: “I’m sorry for that, ma’am. He’s just a child.” But it was clear that the woman was not angry with me. She had a beautiful, welcoming smile which lit up her face like sunshine. Taking my hand in hers, she said, “That’s all right, honey. I know you didn’t mean it.”

The memory of that warm hand and warm voice, over forty years old, still fills me with a gratitude and emotion that I cannot explain or properly express. I can only tell this story. Because my grandmother insisted I remember it, it is part of the story of her ancestors and how their descendants—including me—must try to come to terms with guilt three centuries old. But it is also about how the woman in the movie theater, and Aunt Sammy, each in her own way, had already come to terms with that far greater challenge: how to forgive.