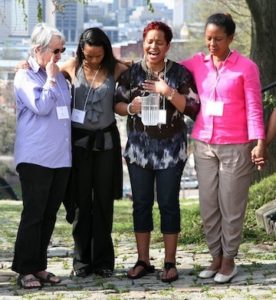 Sylvia: In March I attended the Coming to the Table National Gathering. Most of us had connections to slavery – descendants of slaves and slave owners.

Karen: Sylvia and I share another tragic connection, one we’re each seeking to heal. One of Sylvia’s ancestors had been lynched, and I discovered some years ago that a woman and three men were lynched in 1912 in my parents’ ancestral home of Hamilton, GA. The mob was made up of my kinfolk; my great-grandfather was the sheriff. One man lynched was an African American cousin. The victims supposed “crime” was “miscegeny.” I have spent many years researching this painful story but have been unable to find descendants of the victims.

Sylvia: A spirit was moving among us. Some of us called a breakout group for those with lynching in their family history, descendants of either perpetrator or victim. The seven of us who showed up bonded quickly. Later, when a healing ritual planning group met, we were delighted to discover most of us were also part of that. Toni, whose great great uncle had been lynched, took beautiful charge of the planning group and gently inspired us toward offering a simple libation ritual, a circle in which we’d call our forebears–perpetrator and victim–to join our circle.

In Richmond I had such a strong sense of place, time and ancestral spirits. Huge monuments were everywhere and I could feel the devil and angels there. During the healing ritual we stood between the James River, site of one of America’s largest slave trading ports, and an enormous monument to Confederate soldiers.

We held hands in a huge circle. Each of us in turn called out our ancestors’ names, poured libation and said “Ashé!” (Ed. Note: “Ashé” is a Yoruba word from Nigeria and means energy of the universe, the force toward completeness and divinity, or more simply, “So be it.”) Four of us stood together as descendants of someone who had been lynched or had been a lyncher. I called out my uncle’s name and the names of other family members touched by slavery. A participant whose Rhode Island family made a fortune in the slave trade over several generations fervently called out her ancestors as a group, saying she couldn’t know which of them was repentant in their life times, but prayed some were and asked any and all of them, from out in the spirit world, to come into this space to beg for forgiveness.

I wasn’t expecting my own tears. It was an amazing and powerful experience to be standing with so many very diverse people who all long to heal our nation’s “hidden” wounds.

Karen: When I first discovered my family’s lynching history I wept for days then steeled myself for the grueling work of excavation and expression. I decided to write a book and I didn’t want it to be awash in tears. I thought the well was dry, but the common ground and compassion I felt in that circle invited long-suppressed tears to flow.

The gathering provided a passage for many of us who found there the loving connections we needed in order to heal. Sylvia and I went home empowered to continue our writing. We joined many others in renewing our commitment to building CTTT as an organization dedicated to healing our nation’s history.