A View from the Open Window

The Story of David Pettee and Pat Mann, by Sha Jackson 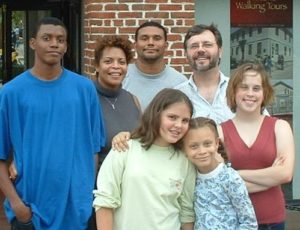 The window of opportunity has been often looked through, in this country, by those with pale skin and European heritage. The views from the outside looking in have been frequently experienced by those with darker skin and, most commonly, African heritage. The separating factor in each of these perspectives is our country’s history that has placed classifications on who is able to occupy either side of the window. Often those on the inside looking out don’t even perceive there being a window or wall at all. When one chooses to explore the nature of life on the “other” side of this division, there can be a paradigm shift in thinking that is trans-formative. It can lead one from the institutionalized (and unconscious) acceptance of class structures based on race to questioning and even being horrified by what have become obvious racial disparities in which one participates. In February of 2007, David Pettee found himself stepping beyond the comfortable side of the window into a world he had known only in research. In a land removed from his home by almost five thousand miles, which held a history removed from him by nearly three hundred years, Ghana embraced Pettee as he sat in a whitewashed room that overlooked the Gulf of Guinea. Staring out of an open window, he was able to connect with ancestors who witnessed the same view years before him, as they sat in this room to negotiate for slaves as members of the trans-Atlantic slave trade. Pettee candidly recalls his account:

The experience [of being in Ghana] was both amazing and dreadful at the same time. While there I had incredible conversations with native African people about slavery and the slave trade, which is not a topic that people want to talk about in Ghana much like they don’t want to talk about it in the U.S.

The thing that most spoke to me in this experience was visiting the building that was the holding place for kidnapped Africans and the negotiating space for those who would barter them. It was a rather large, white structure that overlooked a courtyard and caught views of the Gulf of Guinea. Entering this building through the dungeons on the ground floor, I became more acquainted with my senses. I was able to see, feel, smell and hear for myself, to a degree, what it was like for the many Africans who were held there. It made the experience of being the descendant of someone on the other side of this coin of dehumanization quite real. This room was very dark, carved out of rock with just a tiny sliver of light. It is inconceivable to imagine a time when this space, with no ventilation and an area of fifteen by twenty feet housed, on many occasions, a thousand people. It is the kind of place where, if you close your eyes and get still, you can hear screams.

On the second floor above this holding place was a room called the Palaver (an old English word for negotiation), which is where the bartering for African people took place. The room, which was once a business room for the governor of the colony, sat empty save for the memories that the white-painted stone walls retained. It wasn’t very big. It was probably thirty feet by seventy feet. It is not remarkable—kind of unremarkable in its own way—bureaucratic and sterile given what took place in it. You’d never guess what happened there by looking at it. It’s not horrific.

I remember turning and looking out of the glassless window that had been there since the seventeenth century, while the wind from the sea kissed my face. When I recognized that I had the same view out of the window that my ancestor did, the two hundred and forty-seven years [between us] disappeared. I am certain that my ancestor, whose name is John Robinson, negotiated for enslaved Africans in that room, possibly even for Cuff Simmons. I recognized in the documentation of one of my ancestors a man with the African first name Cuff, which is a variation of Kofi, a Ghanaian Akan people “day name.” I knew he was African, so I began researching him and found that he was listed as a free Black man when he died. I found connections and relationships between his family and my family from the time that he was born in 1773 until he died in 1842. Cuff married a woman who inherited land from an early free African in Rhode Island that was passed forward in the family until 1940. By virtually following land deeds and identifying people and dates, I was able to locate a woman who lived in Queens, New York, who was probably in her late eighties when I contacted her in 2007. Her name was Marguerite and she was the descendant of Cuff, who had been enslaved by my family in the 1770s. I contacted Marguerite by writing her a letter.During the process of writing I thought, “I am a white guy from Massachusetts. What am I going to say to her?” I was full of a lot of irrational fear that I have since let go of.

In the letter I introduced myself, told her of some of my findings and informed her that I would like to follow up in a couple of weeks to see if she wanted to talk or had any questions. I waited for two weeks. Nothing happened. So I decided to I pick up the phone and call her. A younger woman answered the phone, who as it turns out was Pat.

I first met Dave by phone. He called to ask if anyone had received the letter he sent. I told him that more than likely my mother had received it and had not given any thought to it if she did not recognize the handwriting or return address. I then very politely and earnestly asked why he was calling. He told me that our families have a long and complicated shared history that goes back deep into the pre- and post-colonial times in Newport, Rhode Island. He then asked if I had heard of Cuff Simmons. I told him that Cuff was a member of my mother’s family, but we knew little about him. David told me that Cuff Simmons was enslaved by his family. I jokingly asked him if that made us cousins. He responded that he didn’t know, but he had some information that would help put our relationship into context. After sharing this information he told me that he would be delighted to come down [to New York] and have a conversation. I was a little unsure about how my family would feel about this so I told him that I would talk it over with them and get back to him in a few weeks. After those weeks had passed I received a binder of documents from David. It was filled with eighty-five pages of our family history. They were arranged in chronological order and filled with details of land grants and marriage certificates. David followed up with a call and I asked him when he would be able to come down. Within a week he came down to meet my family and we began having conversations about our very interesting historical connection.

Dave’s contact with me and my family was a welcome surprise. Just weeks before our interactions, I had asked my mother about my paternal grandmother’s maiden name, and then out of nowhere, there was an outpouring of all this great information. Dave delivered to us a piece of our family history which would have otherwise been unknown to us. This information was especially important to me during this time in my life when I was curious about the past, and also important for me to have in order to pass along to my four children. Facing my personal history has made me realize the importance of a national need to recognize history and heal from slavery’s legacy.

It was fascinating to watch the reaction of my family members as they received this information. I didn’t recognize just how affected they were until this meeting with Dave came about. It was heart-wrenching to witness my uncle face this history while openly dealing with the fact that his sisters “passed” (lived life as though they were of another race) for Caucasian and European, and did not associate with those who openly identified as being African American. I can’t imagine what these broken relationships did to my uncle and the hurt involved with our family history in his eyes. Meeting Dave was an important step for us to take in learning and understanding a family history that we had known little about.

Dave’s trip to Ghana allowed him to connect with a part of his history, which ties him and Pat together. His discoveries have been an effort of regeneration, and have taken his and Pat’s family on new journeys.