A Moral Debt: The Legacy of Slavery in the USA 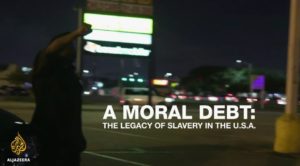 Journalist James Gannon has inherited a controversial family legacy – that of a clear descendancy from General Robert E Lee, who led the Confederate Army against the Union during the American Civil war in the mid-19th century.

Gannon grew up in Richmond, Virginia, the former capital of the Confederacy, where an 18-metre high statue of his ancestor dominates the landscape in Monument Avenue, the city’s grandest street.

For over 100 years, Richmond has honoured Lee as one of its greatest heroes. Until recently.

To read the rest of this article, and to watch the 50-minute film, go to: A Moral Debt: The Legacy of Slavery in the USA, by Lynn Ferguson and James Gannon for Al Jazeera Correspondent